What a day! It is Sunday here so we went to the big building that we normally go to on that day of the week. We were told to have two people share their stories and intro the team as well. When we got there, it was a whole other story!

We arrived at about 2:40 for a 3pm gathering. We were told it started at 4pm and that we were early. okay, well what do we do for an hour. Oh, here is the leader of this gathering, maybe he’ll explain more… We told you to come at 3 to talk with people and then you can start at 4. You can start? We only have about 10 minutes of stuff prepared. Well you have until 6pm, they hear me every week, your our guests, please, it’s all yours. I’ll show you the songs that we normally sing. Okay. one sec. We’re doing the whole thing? right. here we go! All about flexibility. We don’t have a guitar, no music with us, no hand drum or drum sticks for the ghetto set in the corner. Let’s pray!

So at about 4:15 we start singing with out any practice. Old electric guitar, me on the drum set, two back-up vocals and some random girl that jumped on the bass as we started playing. Oh and the chords for the music were up on the screen because we couldn’t get the music printed. So Nate was leading off of a laptop that was also the words for the people to see in order to sing off of. And all of the songs were out of order! So amazing, people still entered in and the HS still moved, with Him all things are possible.

Then JoAnne went to do a dance to a song on the ipod, but the sound board was all messed up so we only heard it through one channel, basically we heard half of the song and it sounded like it was skipping, she was a trooper and finished the song though, Way to go JoAnne!

At about 6:30 we left after everything else went smoothly and headed to the grand hyatt hotel to meet Petrina’s parents for dinner. They treated us to an all you can eat buffet there. It was amazing! We were pinching ourselves to make sure that we were still in j-city. We were so blessed. Sushi, salad, steak, shrimp, fresh made pasta, duck, cheese and crackers, chocolate fondue, ice cream, crepes, and the list goes on. I think we ate for about and hour and a half, no joke!

Once dinner was over a few of us decided to go to a movie to top the night off. Adam is still with us, our local tour guide. So we hopped in his van when his driver picked us up and went to the movie. Now the movie wasn’t very good, but the theater was so cool. We went to a premier showing it is called. The seats were plush leather recliners, that you could fully recline and watch the movie. There were also blankets to snuggle up with and they brought drinks to your seat. I know for a fact that the seats were more comfortable than my bed! It was so crazy, we were giggling we couldn’t believe what was going on around us. So much fun. After such a long week, we couldn’t help but thank the big guy for taking such good care of us. Trust me, we don’t take any of this for granted, I still can’t believe that we had such an amazing evening. Sounds like tomorrow will be pretty amazing as well! 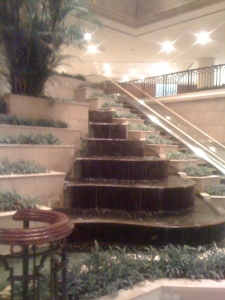 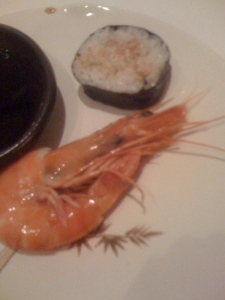 sushi and shrimp anyone? 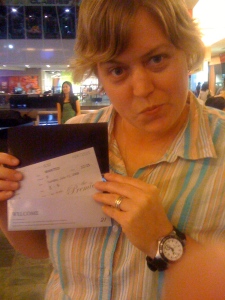 Do you see those chairs? Amanda thought they were pretty amazing!

Don’t worry, this probably won’t happen again, I paid $5 for all of this, can you believe it?

Until next time,
Natalie