It’s not that I have been too busy to write lately, in fact, I think that it has been the opposite. I’ve been too sick to do anything that is of importance to share with you. Well, that’s not entirely true. I have been sick, but I’ve only been doing about half of the stuff that the team is doing.

Friday – I stayed home all day, the team was here until 4pm and then went and taught English at the water slum in the evening so I stayed home hoping to get better since we has two early mornings for the weekend.

Saturday – We were up and out of the house by 7am and arrived for a meeting that was a follow up to the conference that we did a couple of weeks ago. No one told us that it started at 9:30, we were only told to arrive at 8, but we got there early thinking that it started at 8am… we’re not always late, so I’m not sure why they wanted us there so early. The meeting lasted until about 1pm! ugggh, I don’t want to sit all dressed up in a church like setting for 4 hours when I can only understand half of what is being said. We got done there got some lunch and I went home with half of the team.

While they prepared for today, I rested. Thank you Lord! The other half went and did a youth service for a local church, I was supposed to go with them, but obviously didn’t.

Sunday – This morning we had to be up and ready to go at 8am… a little better. We went to the same church that we did last week, but went to a different service, and we didn’t have to do worship! We had lunch for them after the service and then I was told to go to the hospital to see a doctor and get better. So, Rachel and I went and found that the wing of the hospital that I would need to go to was closed. So we bought cough syrup and nose spray and went home. That about brings you up to date with what has been going on here. Not that exciting, I know! Hopefully this week will be good and I’ll be feeling up for it! 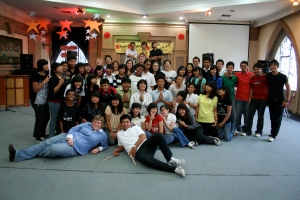 This is the youth service that we did at the church today, not to be confused with the teenage one or the young adult one… ay, ay, ay confusing! It’s a big church of about 10,000, but we have yet to see a big service, except on the TV while eating lunch!

One thought on “The last few days…”