Sunday: another early morning starting with our team meeting. I don’t think it would be too bad except for the fact that we stay out so late at night. We have American morning getting up and being ready to go by 8am then European evening where we don’t eat dinner until about 9 or 10 pm and often that’s when we start eating. It is also very European to stay at a meal for a couple of hours! We usually make it to bed between midnight and 2am…

Anyways… ON Sunday we went to church at a Spanish church, it was pretty cool that I was able to follow along some and understand what was being talked about. Alt ought the service was 2.5 hours long in a very sweaty room. After church we went out and grabbed Chinese for lunch, kinda odd, but I guess it works! We also heard from some other field workers that have partnered with Summer in the USA (SUSA). They shared about how they are working to reach out around here in different ways.Then Sunday evening Tom, Dave and I went over to the Baker’s apartment and had dinner with the family, we played games and watched some YouTube videos… Real spiritual, right? Haha, it was such a great time to hear about their experiences so far. And now that we’ve seen the culture we were able to ask questions about how things will work with their family and being in this culture. It was such a blessing to spend some one on one time with them!

Monday: we had a pretty laid back day on Monday. We were given the task to. Go out in the city and observe the people. It was a great time to spend praying for the. And watching them. I felt that the best place to do all of this watching would naturally be the beach 🙂 the weather had cleared up for the afternoon and it was great to be at the beach when it wasn’t too full.
That evening we headed to a house of one of Bill’s former basque students and he prepared a great dinner for us in Orio. We ate BBQ chicken, chorrizo, salad, pork ribs, and lots more. We all sat around and ate lots of food and laughed a lot together.

Tuesday: We headed up to the mountains again on Tuesday, and we saw and old monastery up there in Arantzazu. It was build into the mountain side so there is a ton of chiseled rock all over the place, it was quite beautiful up there and the drive going up was amazing! I’ve been taking tons of photos of the trip to share with everyone. The few I’ve posted here are just teasers. Every time I turn a corner, there is something beautiful to get a shot of.
We then headed down to a town called Elorrio and met some more believers, they showed us around the town. This is a day where pictures really have to explain it all!

Wednesday: We were able to go to the Baker’s new house that they just rented, we helped them get most of the bedrooms painted for a couple hours in the morning. We also helped put together some of their new furniture, they really do a lot of ikea shopping here. That’s where all of their stuff came from! We then went and met with the pastor of the Spanish church that we attended, he shared his story with us and his heart for the Basque people. His church right now is mainly full of Latin American immigrants, but he is basque and would like to reach them. We then went back over to the Baker’s house and helped them some more. Then that evening we had a reunion with some of the students that came to the US this summer. I handed out raffle tickets for everyone to win a basket full of American goodies.
Afterward we went to Gateria and we were served dinner by a Chilean couple. It was totally seafood… Squid in it’s ink, crab dip, hake fish, tuna fish, peppers stuffed with a cod paste type thing, salad and bread. It was a full meal with lots of new tastes, I was good and tried it all!

Thursday: I finally got to accomplish one of my life goals! I got to go surfing! I went to Zarautz where Johnny taught myself, Daniel, Chase and Andrew how to surf. It was such hard work, but so much fun! I didn’t quite make it to my feet, but I did make it to my knees, which was pretty exciting for me!

Then we rode the bus back to Donostia (San Sebastian) and finally got into my apartment and showered. We then had another reunion in a city about an hour away in Bergata. It was pretty uneventful, but that might have to do with how tired I am after using all of my energy at the beach.

Tomorrow morning I’m hopping on a plane and headed home, I’m sure I’ll have more to say after the tiredness wears off, see you soon! 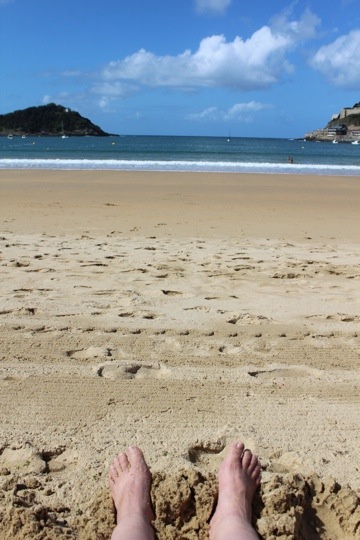 some time at the beach

monastery built into the mountain

monastery from the other side 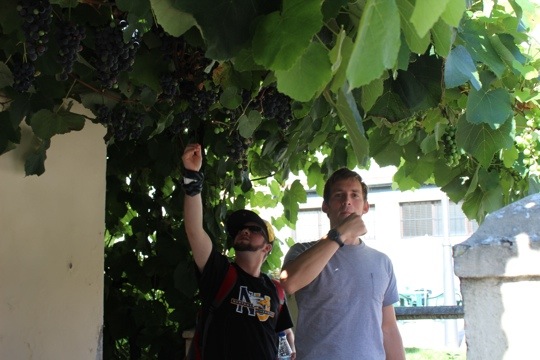 eating grapes from the vine in Elorrio

Painting and building a the Baker’s 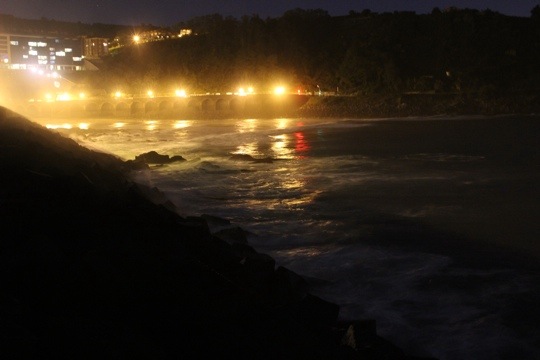